Are you still there?

The exhibition Are you still there? assembles twelve positions dealing with questions of presence and representation of identity in the digital age. Online identities like Facebook profiles, Instagram or Whatsapp accounts are constantly gaining significance for our everyday lives: Who are we online? How do we present ourselves via social media? What is our status and when was the last time we have been online? The revelations of Edward Snowden have taught us that the NSA and similar organisations are collecting our data on a large scale: These data have been generated by ourselves on a day-to-day basis simply because we have been communicating with other people.

The title Are you still there? references a certain situation in the chat program Google Hangouts: After an interrupted video call the browser window wants to know if the user is still there. Are we still there? How much time do we spend online? What kind of pictures do we have of each other and how do we picture the world nowadays?

The artworks displayed in the exhibition cover a wide range of contemporary art, including references of classical internet art, online interventions and performance art. With animated GIF-tableaus, video collages and interactive artworks the artists question the crucial relationship of society, internet and identity. 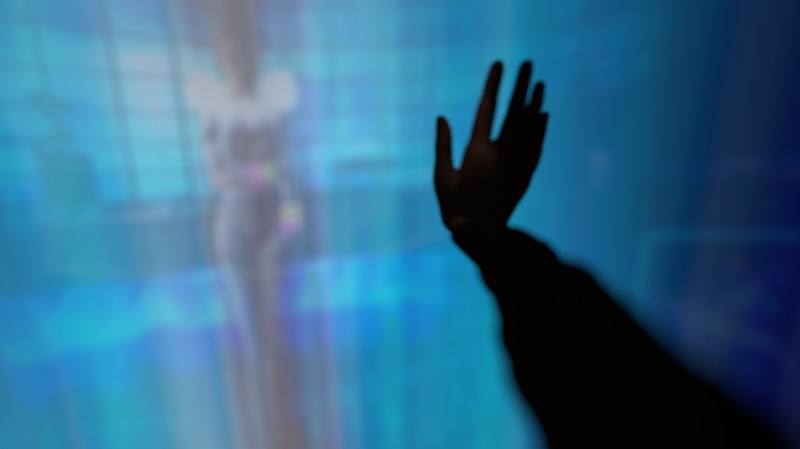 Offline Art: Are you still there?

Like Pearls (2014), Morehshin Allahyari
“Like Pearls” is a mash-up of sex and romance collected from my Farsi email spam and online underwear stores based in Iran. I manipulated and layered GIFs such as hearts, flowers, candles, birds, and butterflies on top of digital advertisements.

34 frames (2015), Alma Alloro
In this series I am making quilt in the (american) traditional way, using singular-colour cotton fabric and a sewing machine. I scan the quilt and used each of the patches as one frame in the animation, inspired by early experimental animators such has Hans Richter and Oskar Fischinger’s research of forms and motion, the art and craft” movement, focusing on the craft element of digital art.

Blue Brightness (2012), Anthony Antonellis
A bluescreen usually represents ‘no signal’ on beamers or a crashed system on windows. Antonellis uses this metaphor combined with the brightness control and a very faint mirror image of himself to question online identity. How does the computer (Apple mirror glass screens) reflect on us?

Club Rothko (2015), LaTurbo Avedon
LaTurbo Avedon is an artist-avatar whose existence and creative output resides entirely online. Without a real world referent, LaTurbo is a digital manifestation of a person that has never existed outside of a computer. Avedon’s digital sculptures and environments disregard this lack of physicality, and instead emphasize the practice of virtual authorship.

Netzwerkfernweh (2015), James Bridle
Netzwerkfernweh is a mobile, offline interpretation of rorschmap.com, an ongoing reimagining of digital cartography. Inspired by the kaleidoscope (literally: “observer of beautiful things”), Netzwerkfernweh renders historical and contemporary maps strange and beautiful, as true maps should be. Mobile devices inherently place us at the centre of the world; Netzwerkfernweh scrambles the world.

Please wait (2012), Claudia Mate
Claudia Mate motifs deal with humanities perception of scale, self, and recognition of space. Her work Please wait is a constant reminder how much time we spend in front of screens waiting for pages to be loaded, files to be processed or images to appear.

BEFNOED (2014), Eva & Franco Mattes aka 0100101110101101.org
We give instructions to anonymous workers to realize webcam performances. The performers are hired through crowdsourcing services, so we do not know who they are, where they are, or even their motivations. The resulting videos are then dispersed on obscure, peripheral or forgotten social networks around the world, in Cambodia, Russia, China, South Africa…

Not So Colossal Cave Adventure (2015), Niko Princen
“You are in a cave, there is no Internet!” Niko Princen presents a short adventure in which the user eventually is asked to go back online to find the Butterfly (Dutch: Vlinder.) on a seperate app for Android phones.

LSTM (2015), Sebastian Schmieg
Credits: Residency at the WRO Art Center
Long Short Term Memory is a neural network that memorises every book of the futurologist Ray Kurzweil by permanent training. The net learns the rules of composition by which we − and especially Kurzweil − form words, sentences and propositions. Based on this acquired knowledge, the system generates new chains of signifiers that evolve and finally, by constant practice, become words, neologisms and new ideas.

There You Are! (2015), UBERMORGEN
The absence of a societal purpose of online poker allows us to withdraw ourselves from the art world and exlusively focus on the aesthetically pure, on a game of distribution and self-awareness, the game of poker. You can find us (viennazombie & lizvlx) every day and most nights on Pokerstars.com, playing high, variance strategy, frequently hijacking and going tilt from time to time.

Blue Screen (2014) Video excerpt, Addie Wagenknecht
Commissioned by NewHive. Courtesy bitforms gallery, New York.
“Blue Screen” is a narrative composed of three unique webpages reflecting on recent controversies targeting women working in the gaming and technology industries. The overwhelming accumulation of abuse culminated in the psychological halting state embodied by this work. Something is broken. The system has crashed and must be rebooted. Artists have a responsibility to ask questions, challenge boundaries, and burn up what culture doesn’t need in order to make space for change.

Browser-based digital art works are broadcast locally from wifi routers which are not connected to the Internet. Each art work is assigned a single wifi router which is accessible through any device, like smart-phones, tablets or laptops. To access the different art works, the visitor has to connect to each network individually. The name of the network reflects the name of the artist. No matter what URL is opened, only the specific artwork appears in the browser. A small web server holding the art piece is installed on a USB flash drive which is connected to the router. Like frames holding the art, the routers are hung in the exhibition space which is otherwise empty. The art itself becomes visible only on the visitor’s private screen.The pieces are locally widely accessible but disconnected from the Internet. 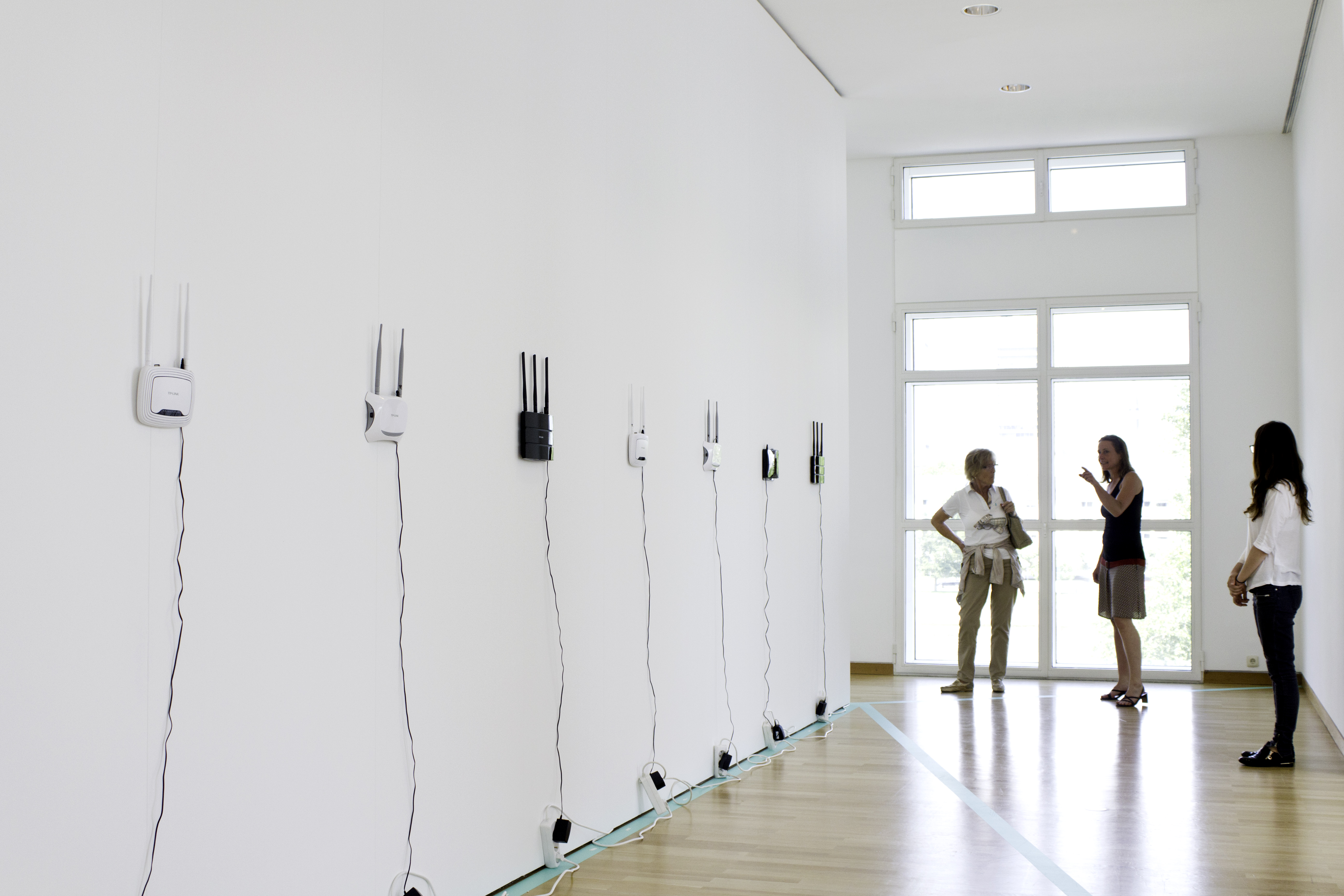 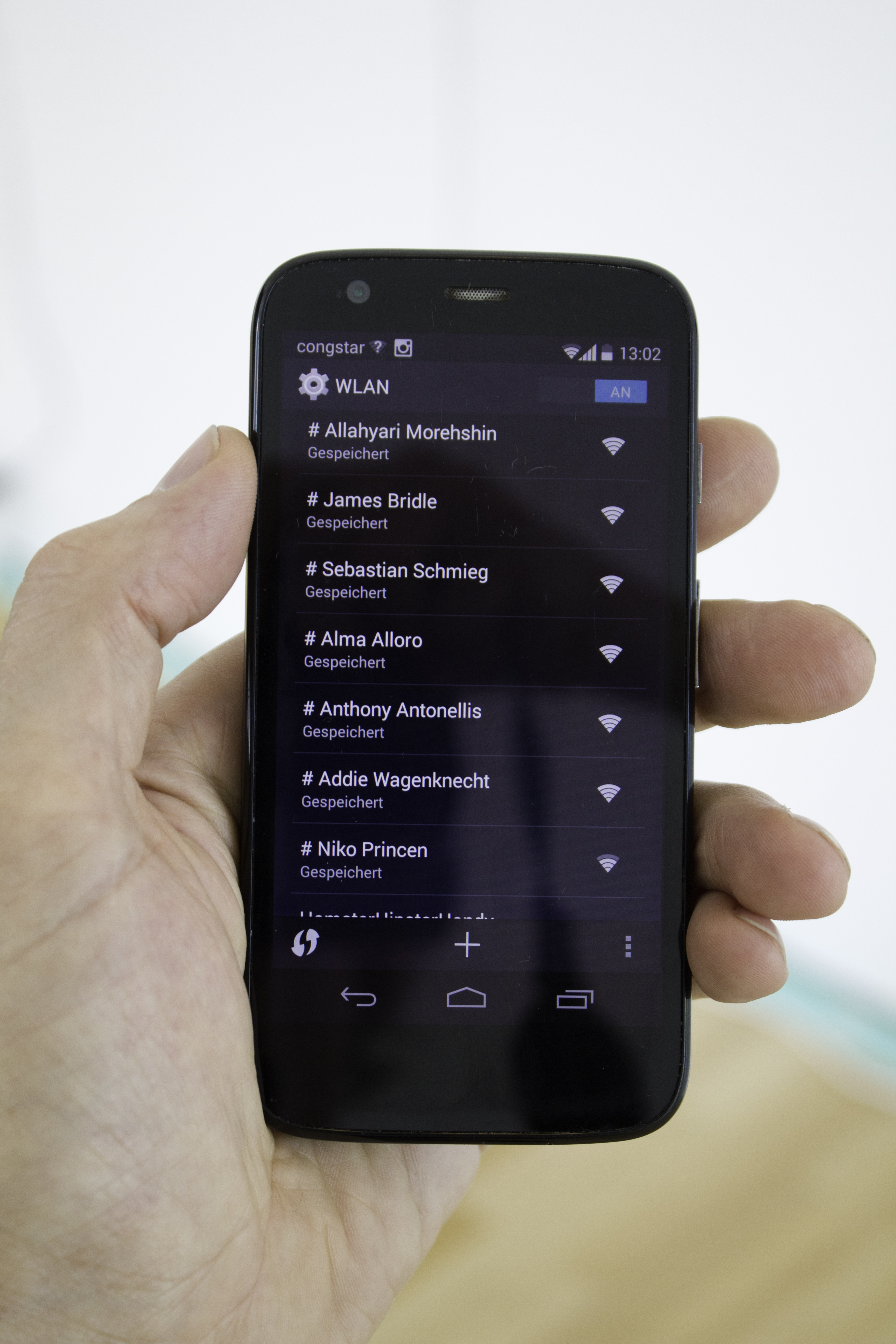 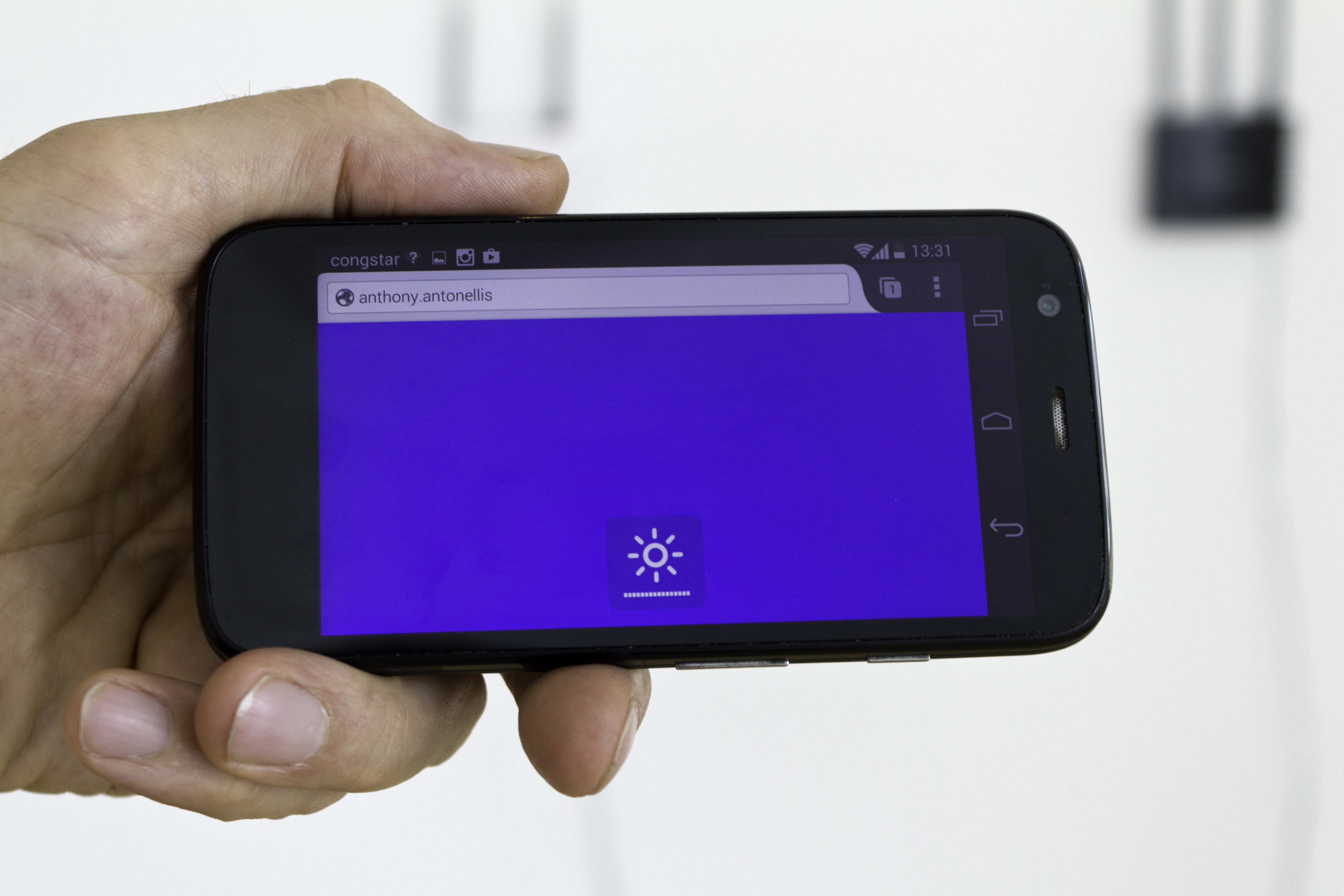 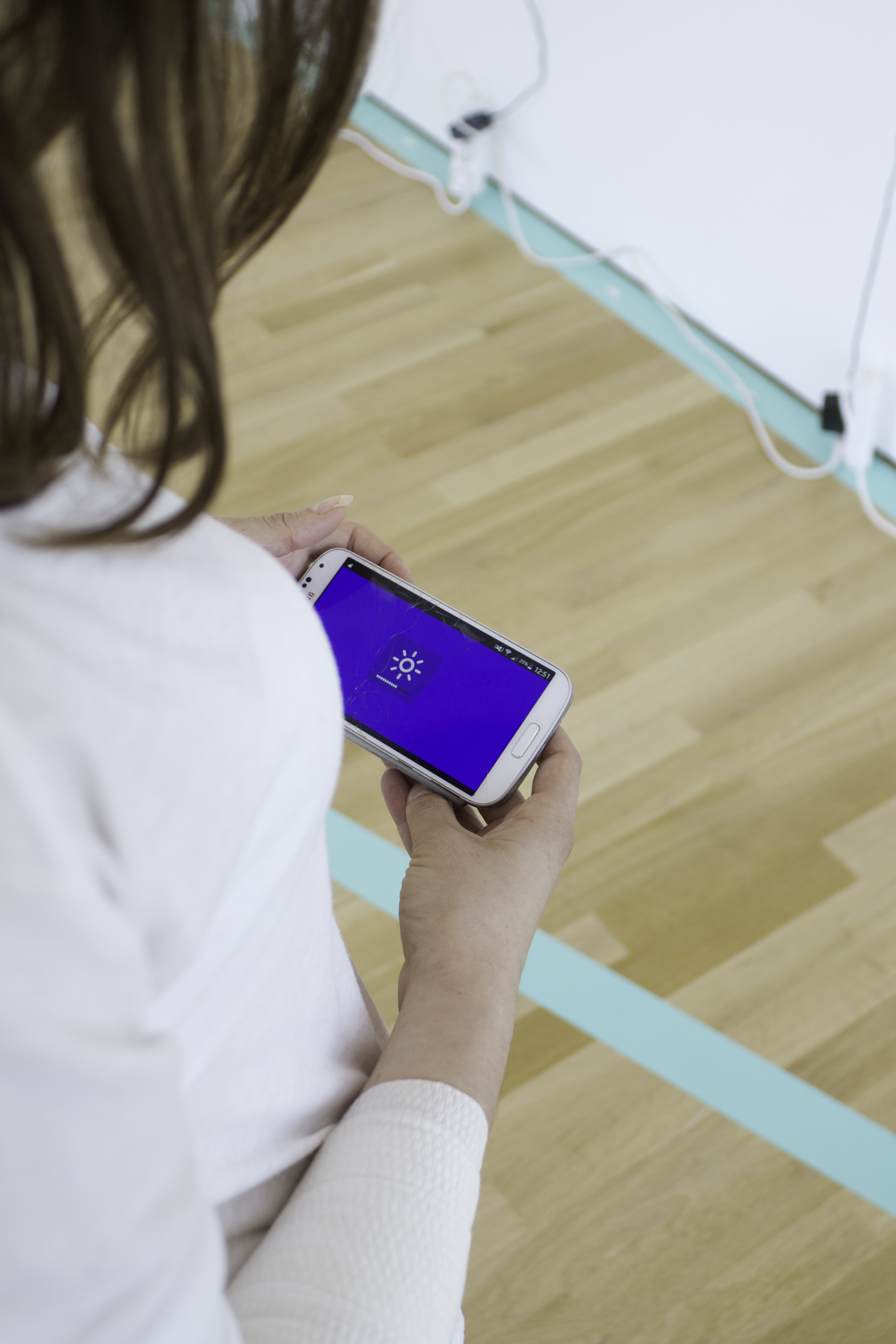 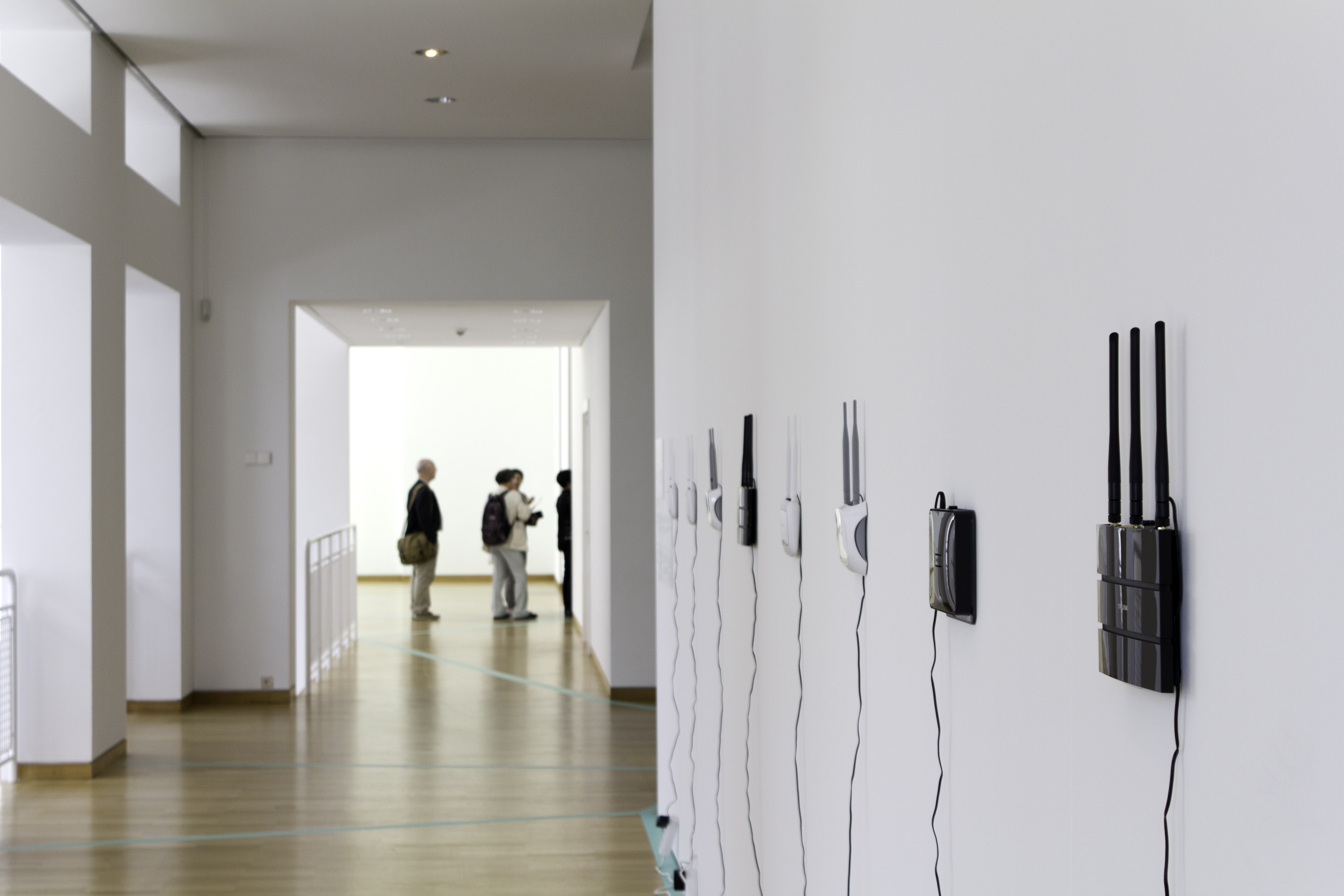